The expression “That quicksilver Child…” is used to refer to children who cannot stop, and who move a lot.

Quicksilver is a way of referring to mercury, a liquid substance contained in thermometers, instruments for measuring body or environmental temperature.

Do you have ever broken a mercury thermometer, it happened to me the first time as a child and I was struck by that poisonous substance.

When you try to keep mercury from the ground, it is elusive, it runs between the fingers that try to pick it up and breaks down into smaller spheres smaller than the original ones.

Mercury is very dangerous. If ingested it can cause death.

The song by Daniele Silvestri starts from this linguistic metaphor which brings together children who move too much to the dangerous and elusive substance par excellence, mercury.

Silvestri with his song tries to understand the endless expanse of a new disorder: Attention Deficit and Hyperactivity Disorder (ADHD).

“Silver Live” propose us a different perspective from the dominant one that sees “hyperactive” children as people with a mental disorder. Maybe we are not in front of an individual disease but to a big collective one.

A specific psychiatry, and consequently our common sense, is increasingly considering a child or a girl who cannot stop and cannot focus attention on monotonous subjects as people to be treated psychiatrically.

We can think that ADHD is a fact, but the facts must be based on facts, so let’s see what the construct is based on.

How is ADHD diagnosed?

Usually, a mental health professional diagnoses psychological problems of children and adults through direct observation, ADHD is diagnosed, according to the practice, indirectly through an interview to parents and teachers.

Professionals ask questions such as:

Does he often move his hands or feet or shake in the chair?
Is he easily distracted by external stimuli?
Does he have difficulty playing quietly?
Does he often talk too much?
He often gives answers before you finish asking the question?
Does he often seem not to hear what you say?
He often interrupts or behaves in an intrusive way towards others, for example, interrupts the games of other children?

It is sufficient, to complete the diagnosis, to respond positively to six of the nine total questions.

The questions above contain words such as “Often”, “easily”, “usually”, “too much”, which cannot precisely define the numbers of problematic behaviours. What means “often” or “easily” depends on the perception of the respondent. 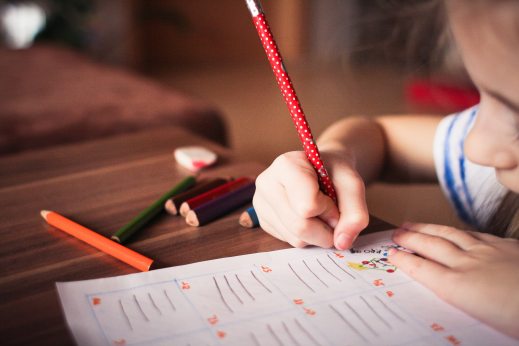 The teachers want to conclude lessons, and they can have an opinion on what “the child is easily distracted” which does not depend strictly on the child but on the experience they have concerning many different factors and variables.

The diagnosis of ADHD is not scientific, because it is based on inadequate and not very objective bases.

However, diagnosis is useful if it can activate resources for the child. For example, with a diagnosis of ADHD, the school must support the diagnosed child to experience proper training and must accept his status as a hyperactive and inattentive child. In a nutshell, the school must adapt to the child’s needs.

This is not always possible in practice, and this is why the dark side of the diagnosis is to raise the inattention of a child to mental illness which, by new defined illness nature, drugs can treat.

The song by Daniele Silvestri and Rancore speaks of one of these cases, in which the school and the world of the diagnosed child become a prison.

I’m sixteen years old, but it has already been more than ten
Since I’ve been living in a jail
I’ve committed no crime out there
I was convicted of it well before I was born
I was forced to remain seated for hours,
Immobile and mute for hours
I, who was quicksilver, Lord
I was quicksilver and inside here we die.

The word “prison” expresses one of the meanings inside: an “inside” is a terrible place where one dies, a prison, in which the bench and the academic institution for as it is made forces one to stop, quiet for hours.

The inside also has another meaning: “Here in, you die” can refer to the “inside”.

The inside-outside organises the reality of the singer, who is a child, a child who lives only an “inside” and lives it as a coercive, because his “inside” has been transformed, and no longer belongs to him.

Furthermore, the outside can no longer be experienced because it is remembered, and belongs to the past. The inside-outside has become a temporal polarity: now – before.

The prison that the child lives is not physical coercion, but a psychological and social one, so you cannot escape from it.

The child says that in the past it was “Quicksilver”, it was the elusive and dynamic matter now transformed into something else, and that he lives only a part of the polarity inside-outside, the inside, which no longer belongs to him and which becomes a prison.

This prison corrects and prepares a life
That doesn’t exist anymore since at least twenty years
Sometimes I think of getting it over with
And sometimes I think that I should get revenge
However, in the evening they send me back home, you know
Because I could reconnect to all my loved ones
As if home wasn’t a cage as well
And as if family wasn’t my house arrest.

Detention is a corrective institution; it must not punish but correct the prisoner and guide him to conduct compatible behaviour with society (not to kill, not to steal).

Thus the child’s prison should correct behaviour, his hyperactivity and inattention, but it results in the transformation of the child’s interior into something different from himself. The inside becomes something that no longer belongs to the child.

He would like to take revenge, but there is something that holds him back, and it is the fact that he will be sent home. The child feels he can escape, only to realise that his one is not a physical prison because the prison also follows him outside the school desk.

I’m sixteen years old, but it has already been more than ten
Since I’ve been living in a jail
I’ve committed no crime out there
I was convicted of it well before I was born

One of how the new therapeutic methods of new psychological diseases are justified is genetics. The disorder is considered genetic, almost regardless of the individuality of the child who seems condemned by factors that exist well before his birth.

The drug that is used to treat ADHD is Ritalin, prescribed from 6 years onwards, a stimulating molecule similar to amphetamines that exploits the paradoxical effect leading to the child’s sedation.

Time no longer passes through the child, who watches it moving sideways because he now lives in his temporal prison “now – before”.

However, the child defends himself and seeks the solution to survive, the movement they denied him, he can find it in the music that allows him to fly, but it is a solitary solution.

The child has clear that those around him do not understand a shit about what happens, because whoever tells him that after he leaves does not understand how his discomfort is done.

You all have taken a child who never stood still
You put him alone in front of a screen
And now you wonder if he is normal
I, who was quicksilver, Doctor
I, so agitated, so wronged
With so little attention
But you took care of me and now
All I’ve got is bitterness and resentment

All that remains is the resentment that is unexpressed anger because they sedate the opportunity to express the aggression he feels. Aggressiveness
is a crucial dimension in every human being and is something different from violence, which is a consequence of sedated aggressiveness.

I wonder if there is still something out there, because who knows if the outside still exists. The “outside”, as we said, is the first dimension that now no longer exists.

The rap of Rancore is the alternative to violence, the opportunity to express aggression even when it has become resentment.

The anger moves away for a moment from the prison and from the psychiatric coercion of children and tries to propose a solution, and the answer is finding a possible expressive form, a useful way to go when they destroyed yours in the name of health.

The road that Rancore proposes is the creative artificial one which stands out from the way of nature, genetics and matter, as seen from the pathologising perspective.

They say that the virtual, the imagination is a chemical movement, a mental fact, and as we said, this is also how the use of the drug on the hyperactive child is justified.

The path of creativity reveals an alternative to this vision: imagination is an artificial fact, different from that vision of nature that reduces everything to matter, denying what is not material (We could say that everything is material, biological and chemical, but human behaviors are currently not included in their complexity from a biological point of view, and for these reasons are to be considered non-material).

With a distracted child,
really, it’s normal
That it’s easier to turn off
than search for a contact

It is easier to sedate than finding a way of communication with diagnosed children because they do not have a conventional communication, but communication that calls into question the social organisation starting from the school.

Distracted children are not up to the rules, they can’t listen, they can’t stand still. It is essential to start asking ourselves if it is the child that needs to be corrected or if the rules must be transformed. We must abandon an approach that sees social and behavioural changes as “new growing diseases” (see autism, etc.), and we must start thinking about the fact that individuals are the same, the social organisation changes. The perception of dangers turns ideas about mental problems and illnesses.

Today the distracted child is the expression of a danger that calls into question the educational institution for how it is made.

We must begin to think of a transformation of our perceptions, abandoning the path of correction of the individual who comes out of the pavement.

We must try to think that you can go on the dirt road and that the asphalted one is not the only acceptable one.

The academic institutions are making attempts in this direction starting from ministerial indications that from the top fall down to schools, but they fail to receive it appropriately.

Probably it is a question of educational methodology that quicksilver children put merely on evidence.